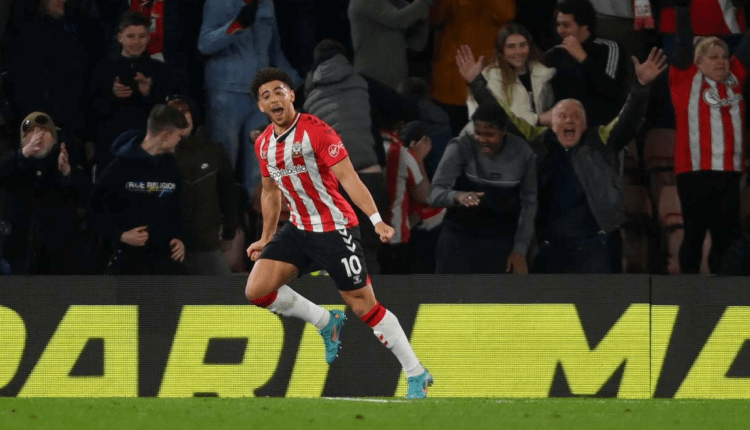 Arriving in Southampton, Norwich had scored six less goals than any other side in the PL this season, and once again saw their lack of attacking quality prove to be their downfall. Josh Sargent saw his side-footed effort blocked, before Billy Gilmour then went close when he put the rebound narrowly wide of the net, but from then on Norwich folded miserably.

Despite a poor start, Ralph Hasenhüttl’s side soon settled and proceeded to play the visitors off the park. Kyle Walker-Peters stung the palms of Angus Gunn, who later denied Armando Broja from point blank range, before the ‘Saints’ took a deserved lead on 36 minutes. The ever-present Tino Livarmento burst down the right, and saw his low cross bundle off a mix of Norwich defenders, and Gunn, before it fell at the feet of Adams. The Scottish international was lying on the floor but still gratefully poked Southampton ahead to register his fourth consecutive game with goal involvement for the first time in his PL career. The ‘Saints’ almost had a second in first-half stoppage time, but Mohamed Elyounoussi dragged his shot wide with the net waiting to be hit.

Norwich haven’t won any of their last 50 PL matches when trailing at half-time, and as Southampton continued to dominate in the second-half, the visitors never looked like changing their dismal record. Hasenhüttl’s men should have put the game out of reach, but Stuart Armstrong saw his effort saved by Gunn, who was again on hand to deter Walker-Peters when the full-back struck his volley at goal. However, victory was secured in the 88th minute when Oriol Romeu thrashed a half-volley from 20 yards out past a bewildered Gunn.

Searching for their first win at Southampton since 1994, Dean Smith’s side were weak in attack, registering just one shot on target as they fell to a 17th defeat of the season. Defeat leaves Norwich with 17 points after 26 matches, which is a lower total than they had at the same point across their last three PL relegation seasons. Meanwhile, the Saints march on and move into ninth, just five points off the top-seven.