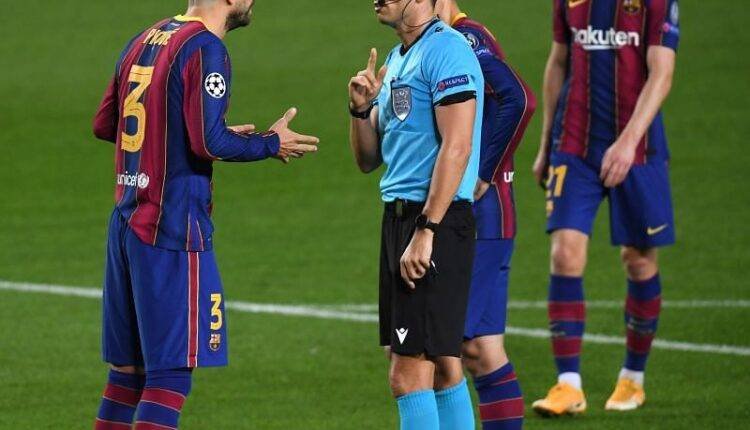 According to Spanish publication Diario Sport, Barcelona veteran defender Gerard Piqué could face a 12-game ban from the Spanish FA for his comments against Real Madrid.

Pique was recently interviewed by Post United, where he questioned the integrity of the La Liga officials, claiming they favour arch-rivals Real Madrid more often than not.

The 34-year-old controversially stated that La Liga referees support Real Madrid on the pitch and even unconsciously give decisions that go their way.

Gerard Piqué's comments about referees yesterday will be looked into by the Royal Spanish Football Federation, who could take action against the defender. [sport]

In a reaction to reports claiming that many former referees in Spain were Real Madrid supporters, Pique said:

The other day a former referee said that 85 percent of the referees support Real Madrid,  Pique told Post United. “How are they not going to whistle in favour of Real Madrid? Even unconsciously, how are they not going to give more for one side than the other? And I respect the referees’ professionalism and I know they try to do their best job, but when a moment of doubt comes…” Pique added.

Reports from Spain now claim the Spanish FA are set to investigate the Barcelona star’s comments, with a potential 12-match ban on the cards for the 34-year-old.

The veteran defender could be fined if found guilty of breaching Spanish FA guidelines, and it could cost him between €600 to -€3, 000.

In the interview with Post United, Gerard Piqué revealed how influential both Lionel Messi and Sergio Ramos are on Barcelona and Real Madrid, respectively.

When quizzed about the duo, Pique revealed that neither player impose their will on their respective clubs.

🚑 (UPDATE ON PIQUÉ): Gerard Piqué is on track to recover in less than four months which was expected earlier.

• It's almost impossible that he will be available for the 1st leg against PSG, and should return towards the end of this month.#FCB 🇪🇸

“I think not, I am very convinced. They have the stature and can give their opinion and, from there, decisions can go one way or another. When you have a board of directors or a president who are very strong, who have the right, clear ideas, and they want to do something, the player has little say.” Sergio’s [contract] renewal is an example of when there is a strong president,  who makes a decision and wants to take that path and the players can’t do much, Pique added.

Gerard Piqué has been sidelined with a knee injury since November when Barcelona locked horns with league leaders Atlético Madrid.

Michael Owen predicts the result for Liverpool vs Manchester City