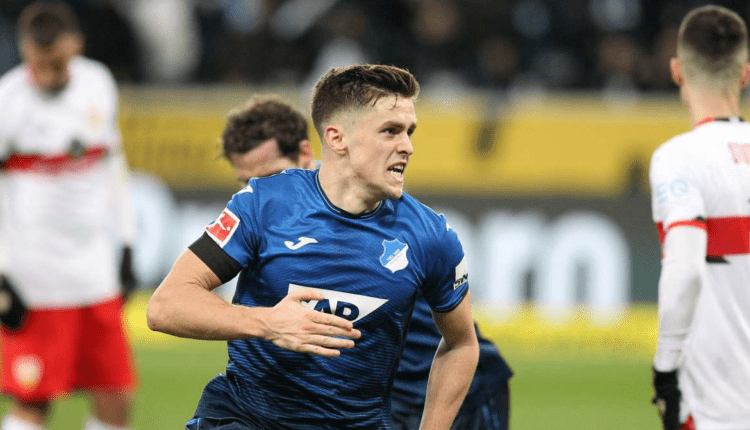 Hoffenheim were the comeback kings once again as two late strikes from Christoph Baumgartner secured a dramatic 2-1 win over Stuttgart at the Rhein-Neckar-Arena, extending the visitors’ winless Bundesliga run to nine matches.

This battle between two southern German rivals seeking to make ground at opposite ends of the table provided plenty of entertainment in the opening exchanges, with 10 goal attempts inside the first 21 minutes.

Stuttgart’s Omar Marmoush flashed a volley wide and had a penalty shout turned down despite David Raum appearing to handle the ball inside the box. Both sides hit the woodwork in quick succession, as Chris Führich inexplicably hit the post with the goal gaping from Marmoush’s cross. Then it was the turn of Hoffenheim’s Pavel Kadeřábek to hit the bar on the rebound after Florian Müller made an excellent save to keep out Benjamin Hübner’s initial effort. Hübner thought he had redeemed himself for his earlier miss by quickly firing home a loose ball to capitalise on some sloppy Stuttgart defending, but the VAR determined that Georginio Rutter’s touch in the build-up to the goal should see it ruled out for offside.

Ihlas Bebou had a chance within seconds of the restart for the hosts, but Müller was equal to the Togo international’s effort with a fine save. But this was a Stuttgart side whose ambition belied their lowly league position, and Philipp Förster was unlucky to see his attempt deflected narrowly wide of the far post. It was during this passage of play that Dennis Geiger pulled up with an injury and was stretchered off the pitch, replaced by Sebastian Rudy. That was the first part of a body blow for the hosts, as skipper Wataru Endo fired home at the far post from the resulting corner after Saša Kalajdžić brilliantly flicked on Marmoush’s set-piece to break the deadlock in the 58th minute.

Hoffenheim needed a quick response, and Bebou should have levelled the scores when he headed wide from Raum’s cross. It needed something special to wipe out the deficit, and that is exactly what happened courtesy of Baumgartner, who cut inside from the right flank and unleashed an unstoppable piledriver of a strike past Müller in the 85th minute. However, Baumgartner wasn’t done yet, and he capitalised on some sloppy Stuttgart defending to lash home a stoppage-time winner and send the home crowd into raptures.

It was the sixth time that Sebastian Hoeneß’ side had come back from behind to win in the league this season, as ‘Die Kraichgauer’ moved into the top four, while Stuttgart remain 17th and in the automatic relegation zone.