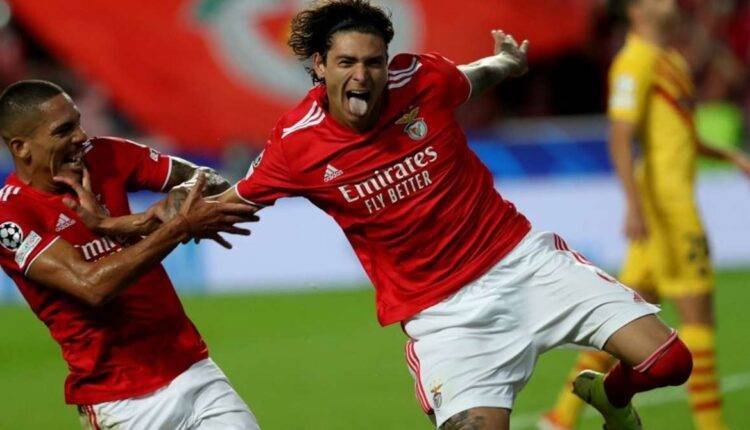 Darwin Núñez’s brace either side of HT secured a historic 3-0 win for Benfica over Barcelona, condemning the five-time winners to a first-ever blank from the opening two games of a UEFA Champions League group stage.

After losing the opening match of a Champions League group stage for the first time since 1997/98, Barcelona would have been hoping for a fast start against the record Portuguese champions, but those hopes were squashed after just three minutes. Dancing past Eric García as if he were a ghost, Núñez shook the defender off with a double stepover, before squeezing his fifth goal of the season past a less than convincing Marc-André ter Stegen.

Barcelona’s problems may run deeper than their current on-the-pitch performances, but the early goal rattled the visitors in a way once unthinkable amongst the club’s shellshocked fanbase. Luuk de Jong in particular looked shaky, when he passed up two golden opportunities to level the score almost immediately after going behind.

Koeman’s job was made immeasurably harder, and less secure, when he was forced to drag Gerard Piqué off after only 30 minutes, as it appeared the veteran defender was one more mistimed tackle away from being given a second yellow card. It had no effect, and two further second-half goals secured a famous victory for the ‘Eagles’.

Barcelona’s night finally descended into genuine farce, when a rebounded shot fell to Rafa Silva, who only had to tap home from close range. Núñez then stroked home his second of the game from the penalty spot, following a Barcelona handball, ensuring Benfica maintain a strong chance of earning qualification from Group E.

With this result, Koeman became the first-ever Blaugrana manager to witness his side fail to register a shot on target in consecutive UCL matches. Should he still be in the hot seat when Dynamo Kyiv visit Camp Nou in two weeks time, he will be without summer signing García, who was given his second yellow card late on.