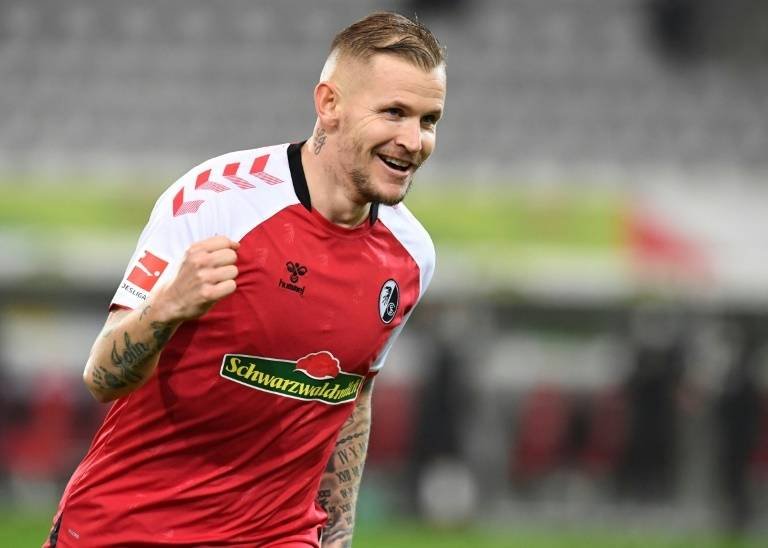 Goalkeeper Marwin Hitz made an embarrassing error on Saturday as Borussia Dortmund’s Champions League qualification hopes suffered as they lost 2-1 at Freiburg in the Bundesliga.

A long-range effort from South Korean youth international Jeong Woo-yeong gave Freiburg the lead just after half-time, before Hitz allowed Schmid’s shot to slip through his fingers at the near post minutes later.

A late strike from 16-year-old Youssoufa Moukoko was not enough to rescue a point for Dortmund.

Elsewhere, former Arsenal defender Shkodran Mustafi endured a difficult debut for Schalke as a 3-0 defeat at home to RB Leipzig kept his new club rooted to the bottom of the table.

Nordi Mukiele gave Leipzig the lead at the end of a turgid first half, beating Mustafi in the air to head the ball in at a corner.

Marcel Sabitzer put the game beyond doubt in the second half, sweeping a low shot past Mustafi and goalkeeper Ralf Faehrmann, before Willi Orban headed in Leipzig’s third.

The win kept second-placed Leipzig seven points behind league leaders Bayern Munich, who had temporarily extended the lead to ten with their 1-0 win at Hertha Berlin on Friday.

Both Wolfsburg and Bayer Leverkusen remained hot on Leipzig’s heels with wins on Saturday.

Second-half goals from Wout Weghorst and Ridle Baku gave Wolfsburg their fifth win in a row away to Augsburg, while Leverkusen were 5-2 home winners in an entertaining clash with Stuttgart.

Kerem Demirbay put Leverkusen in front of a neat back heel volley from close range on 18 minutes and nutmegged Stuttgart goalkeeper Gregor Kobel to double the lead shortly afterwards.

Sasa Kalajdzic struck twice in the second-half, but his second was a mere consolation goal. Leon Bailey and Florian Wirtz had already given Leverkusen a commanding lead.

English winger Demarai Gray, who joined Leverkusen from Leicester City in January, added a fifth before full-time on his debut to pick up his first Bundesliga.

Elsewhere, second-from-bottom Mainz moved to within four points of safety as Moussa Niakhate’s first-half penalty gave them a hard-fought 1-0 win at home to Union Berlin.