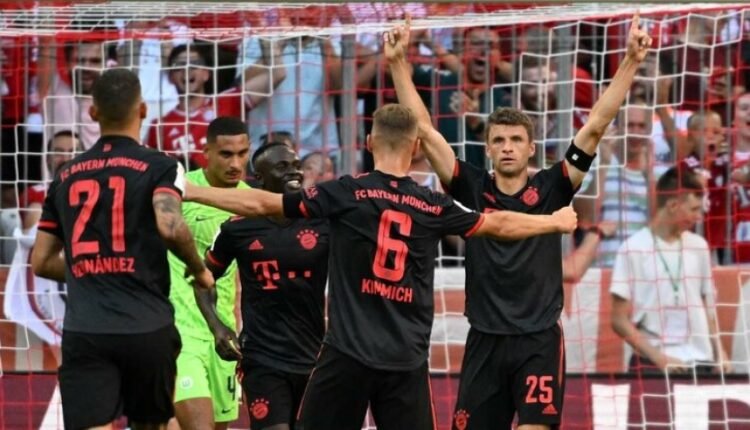 Bayern Munich maintained their 100% winning start to a campaign that could deliver their 11th consecutive Bundesliga title, comfortably defeating Wolfsburg 2-0 at the Allianz Arena. In the process, Jamal Musiala became the youngest German player to reach 14 league goals, aged just 19 years and 169 days.

Wolfsburg took an early lead in their opening 2-2 draw with Werder Bremen last weekend, and were unfortunate not to do so again at a stadium that had granted them no victory in 29 previous visits. With less than five minutes on the clock, Patrick Wimmer’s back-post header deflected off a near-oblivious Alphonso Davies and trickled out for a corner, much to Bayern’s fortune.

The champions also hit the woodwork in response, when Benjamin Pavard’s glancing header shaved the top of the crossbar, and Sadio Mané was denied his first Bayern goal at the Allianz Arena for offside in an electric opening 20 minutes. It didn’t take long for the Bavarians to finally take the lead though, as Jamal Musiala struck his third Bundesliga goal in two matches. The 19-year-old was fed by Thomas Müller, and impressively shrugged off both Wimmer and Maxence Lacroix, before calmly slotting into the bottom-left corner from the edge of the box.

Müller would then double his side’s lead eleven minutes later to increase their command over the Wolves, popping up in the right place at the right time to divert Joshua Kimmich’s weak shot beyond the wrong-footed Koen Casteels. After HT, the visitors responded by introducing Max Kruse, who equalised in the clubs’ previous meeting on the final day of last season. However, the defending Bundesliga champions worked flawlessly to ensure he could not repeat his man of the match performance this time around.

Ultimately, Niko Kovač’s side were unable to steal possession of the ball as Bayern dominated, and it was only the linesman’s flag that denied the Bavarians a true landslide. Dayot Upamecano and Mané again were both offside as they stabbed in from close range in the second half, but Bayern will take heart from a first clean sheet of the season in lieu of a third straight haul of five or more goals, as Wolfsburg’s wait for a maiden success on the Reds’ turf extends further still.