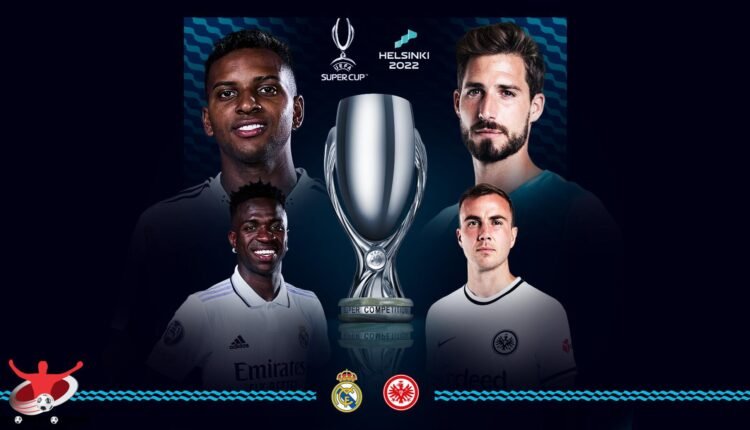 All you need to know about the European Super Cup final between Real Madrid and Eintracht Frankfurt: probable lineups, schedule and where to see it on TV

After the first day of three of the main European championships, and awaiting the start (scheduled for next weekend) of Liga and Serie A, it is time to award the first trophy of the new season: the European super cup . The winner of the last Champions League (Real Madrid) will therefore face off against the winner of the last Europa League (Eintracht Frankfurt). Everything you need to know about the match.

Real Madrid – Eintracht Frankfurt
Just like Serie A, the Spanish league will start next weekend, so for Real Madrid this will be the first official match of the new season. The pre-season friendlies were a crescendo for Carlo Ancelotti’s band. After losing the first to historical rivals Barcelona, ​​there was a draw against Club America and a win against Juventus in the last outing. If we go back to the last official match of last season, it is the Champions League final brought home against Liverpool. Real that aims to put on the bulletin board its fifth European super cup in history, which would make the blancos rise to first place among the most titled teams ever, on a par with Barcelona and Milan. For Real, the historian recites seven overall finals,

On the other hand, the new season of Eintracht Frankfurt has begun, but rather badly. Debut in the Bundesliga to forget for the Germans, who received a good blow from Bayern Munich in their first outing of the season, a 6-1 that leaves no room for any excuse and highlights a fairly pronounced technical disparity. At the second official match now comes an opponent no less, indeed. Unlike Real, Eintracht is in the first final ever in its history, so winning it would be a great achievement for that too.

Real Madrid-Eintracht Frankfurt timetable and where to see it on TV or in streaming
The match between Real Madrid and Eintracht Frankfurt valid as the European super cup final is scheduled for Wednesday 10 August 2022 at 21:00 , will be played at the Olympic Stadium in Helsinki, Finland.

The race will be broadcast live and exclusively on the Amazon networks, and in particular on the app and on the official Amazon Prime Video website. To see it it will therefore be necessary to have a subscription to Amazon Prime. Subscribers to the platform will be able to watch the game by downloading the app on a smart TV, or by connecting their TV to a console: Playstation (PS4 and PS5) or Xbox (One, One S, One X, Series S and Series X). It will be possible to see it on your TV by also connecting devices such as Amazon Fire Stick or Google Chromecast. Amazon Prime customers will also be able to watch the match in live streaming by directly accessing the official website via PC, smartphone or tablet.

Real Madrid – Eintracht Frankfurt: background, statistics and curiosities
As mentioned before, for Real Madrid it will be the eighth final of the European super cup played in the history of the club, while for Eintracht Frankfurt it will be the first time ever. The two teams have no precedent in recent official matches and, again in recent history, not even in friendly matches.

The last official match between the two teams dates back to the Champions League final (at the time the Champions Cup) in 1960, when the merengues won their fifth consecutive cup by beating the Germans in the final with a daring 7-3 final. Seven goals scored by just two players: Alfredo Di Stefano, author of a hat-trick, and Ferenc Puscas, who instead scored even a poker. On that occasion, however, Real did not go to play the European super cup, whose first official edition was played only in 1973 and was won by Ajax against Milan, on that occasion the super cup was also awarded in first leg matches and return; the Dutch won 1-o at San Siro and 6-0 in Holland.