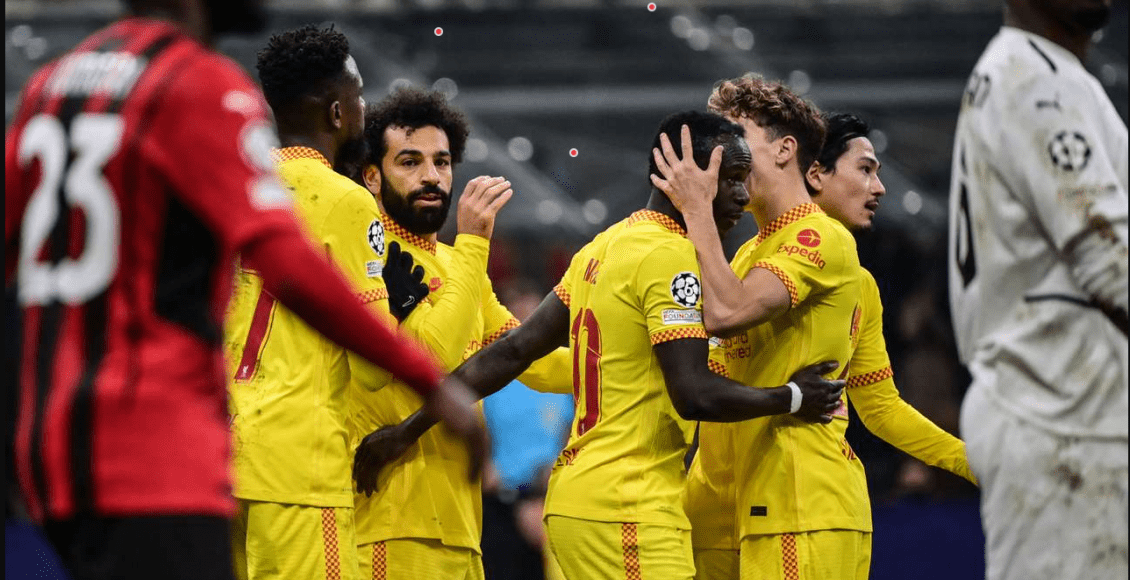 Liverpool became the first English club to win all six of their UEFA Champions League group games as they beat a lacklustre AC Milan 2-1 in Italy. Though Jürgen Klopp’s side did have to come from behind to maintain their 100% record in the competition, dumping the hosts out of Europe in the process.

The visitors, already through to the knockout stages as group winners, surprisingly included Sadio Mané and Mo Salah in their starting XI, the latter of whom fed Nico Williams for an early chance. At the other end, Fikayo Tomori, looking to make amends for his own goal in the reverse fixture, had a header saved before firing Milan into a 29th-minute lead, converting from close range after Alisson failed to hold onto a delivery from a corner-kick.

Liverpool nearly responded immediately as Divock Origi worked some space in the box and had a powerful shot saved by Mike Maignan. The Frenchman could not prevent the ‘Reds’ equalising on 36 minutes though, as he palmed Alex Oxlade-Chamberlain’s shot into the path of Salah who lifted the rebound into the roof of the net. With the strike, the prolific Egyptian became the first player to score 20+ goals in five consecutive seasons for Liverpool since Ian Rush.

Milan needed a win to have any chance of qualifying for the knockout rounds and they were furious shortly after HT when Franck Kessié went down in the box but had his penalty appeals waved away. Minutes later, the hosts were behind for the first time and it was all their own fault. Mané was gifted possession and although his fierce shot was saved, it was only pushed out as far as Origi who nodded home.

Origi headed wide as Liverpool attempted to double their lead, but there was little response from Milan, seven-time European Cup winners, who offered little at the other end with Zlatan Ibrahimović barely getting a sniff of goal as Milan struggled to sustain their attacks. However, a chance went begging for the Italian’s in the dying minutes as Alisson expertly denied Kessié, consigning the ‘Rossoneri’ to bottom spot in Group B.