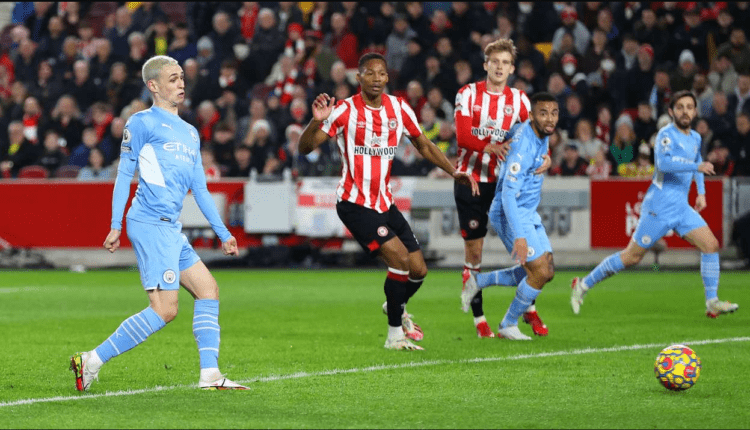 Manchester City stretched their lead at the top of the Premier League (PL) to eight points with a 1-0 win over Brentford, after Chelsea could only draw to Brighton & Hove Albion earlier in the evening. The ‘Cityzens’ are in imperious form, with Phil Foden’s goal marking ten consecutive PL victories as they hone in on back-to-back titles.

24 years since they last locked horns with the ‘Bees’, City had scored a whopping 17 goals across their previous three games and, somewhat unsurprisingly, the match started at breakneck speed, with a raucous Brentford support providing the backdrop to an entertaining opening.

On 15 minutes, Brentford had two chances at goal as Ederson was forced into an impressive stop after the ball took a wicked deflection off Rúben Dias, before the resulting corner-kick saw a goalline scramble with Yoane Wissa inexplicably failing to find the back of the net. The drama didn’t stop there, as City fought back immediately, with a wonderful ball from Kevin De Bruyne finding Foden who swept home to give his side the lead.

As the half progressed, City started to find their rhythm, dampening the home support through a typical dominance of possession. And if the threat of City’s attack wasn’t ominous enough, a defence that has only seen twelve goals conceded this season proved too strong for the ‘Bees’ to penetrate and after the early openings they struggled to impose themselves on the game.

City’s menace continued and Foden saw a goal disallowed for offside minutes after the break. Just after the hour mark De Bruyne saw his 20-yard effort hit the woodwork as City started to turn the screw. Ultimately, it would be the uncompromising performances of Fernandinho and Dias that would secure the three points as they ominously avoided any real drama, whilst seeing another goal of their own ruled out, seemingly still in second gear as Pep Guardiola’s men cruised to another win.

Brentford boss Thomas Frank will have plenty to reflect on as the ‘Bees’ have registered the same number of points on the road as they have at the Brentford Community Stadium this season, making little of home advantage so far.