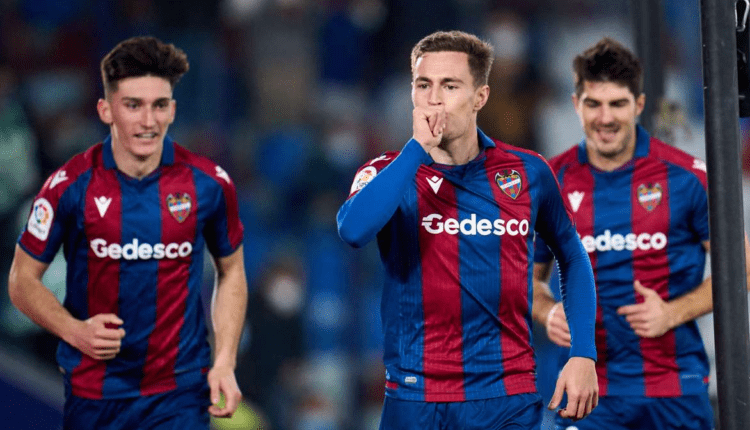 Levante’s desperate bid to stay in the Spanish top-flight took another unexpected boost after they heroically defeated Elche 3-0 at home to move within two points of 18th placed Cadiz.

Despite starting the game nine points adrift of safety, the early warning signs were there for Elche, not Levante, as LaLiga’s bottom side enjoyed some success from wide areas through Jorge de Frutos’ marauding runs and that was the avenue in which they opened the scoring on 37 minutes. Bursting down the right, the Spanish winger laid the ball across to Levante’s captain José Luis Morales to smash the ball into the net off the bar.

The Frogs have a poor record against Elche as their winless run against the visitors stood at six LaLiga matches but that infamous statistic edged ever closer to changing when De Frutos, at the heart of everything positive for Levante on the night, battled his way along the byline before his cross fortuitously fell back at his feet for the winger to slide in a second.

Elche have struggled away from home this season, losing eight of their 13 games, which was a concern for Francisco’s men heading into this contest and their misery was compounded by Gerard Gumbau as the central midfielder attempted to retrieve a ball he had lost in the middle of the park. Instead, he completely mistimed his challenge and was given his marching orders.

Levante managed to see out the rest of the regional Valencian derby without fear of reprieve and added a third late on with substitutes Dani Gómez and Gonzalo Melero combining before the latter tapped in from two-yards-out. Levante’s unbeaten run of form now stands at three LaLiga matches and their survival mission has gone from a fool’s hope to a glimmer of light.