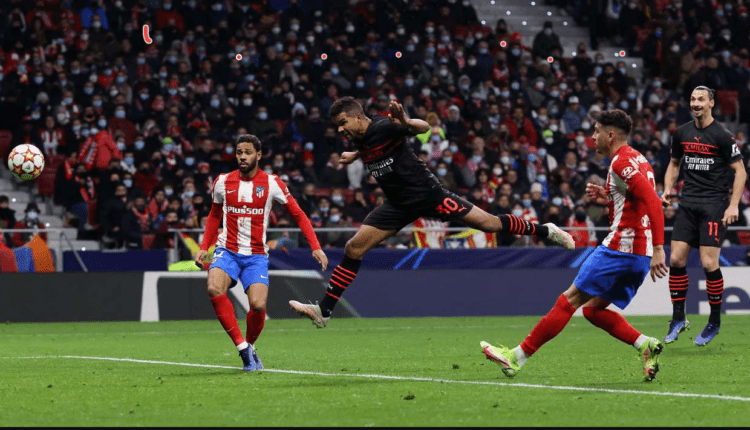 AC Milan dramatically hung onto their UEFA Champions League (UCL) ambitions with a late 1-0 win over Atlético de Madrid to set up a final matchday shoot-out with the runners-up spot up for grabs.

A fantastic atmosphere greeted both sides at the Wanda Metropolitano in Madrid as these two giants of European football clashed. There was a tight, almost nervous start to the game as both sides were wary of making an error. The referee was involved quite a bit to start with, blowing his whistle for niggly fouls which were not deemed bookable. Milan had won just one of their past 11 UCL matches, but they took control in midfield early on and Atlético couldn’t get going. The ‘Rossoneri’ knew they had to win on the night having picked up just one point in their previous four group matches. ‘Atléti’ also needed the victory and that meant the first half failed to show any real quality, especially unsurprising considering what was at stake.

Milan came out in the second half with a little more purpose and Alexis Saelemaekers tested Jan Oblak with a low drive. Atlético found a little more purpose as well when Thomas Lemar saw Milan goalkeeper Ciprian Tătărușanu save from his near-post strike. Diego Simeone cut a frustrated figure on the sidelines as time and time again his side failed to find an elusive end product. Milan striker Zlatan Ibrahamović came off the substitutes bench following an injury to Olivier Giroud, to try and bolster their attack knowing they were likely to be knocked out of all European competitions if they failed to win. Minutes later, Tiémoué Bakayoko should have broken the deadlock when placed with an opportunity but found Stefan Savić in the way.

The game became stretched in the final stages and there were times when Atlético should have put the game to bed, none more so than when Rodrigo De Paul shot straight at Tătărușanu. Milan dramatically grabbed an 89th minute winner when Messias Junior powerfully headed in from a delightful Franck Kessié cross. This result keeps Milan in touch and sets up a three-team battle for the runners-up place.