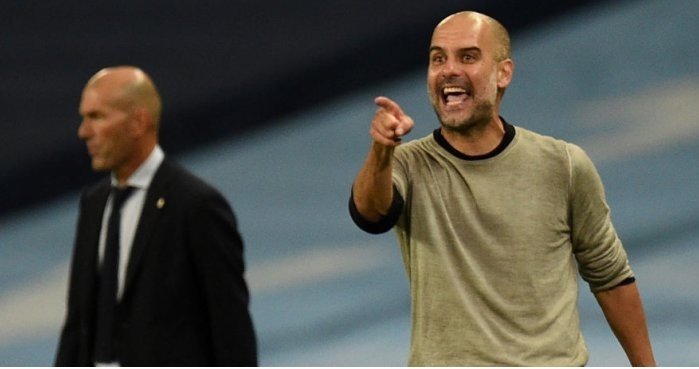 Pep Guardiola insists that Manchester City’s target is to win the Champions League after they beat Real Madrid to reach the quarter-finals.

City held a 2-1 lead from the first leg five months ago, and won by the same scoreline again to confirm their place in the last eight.

Raheem Sterling and Gabriel Jesus scored either side of a goal from Karim Benzema to give City a 4-2 aggregate win. They will face Lyon in the next round.

After the game, Guardiola revealed how a change in City’s approach to pressing helped them get the job done.

“We created a lot of chances and scored two goals with mistakes from them,” Guardiola told BT Sport. “We tried to convince them to go, go and attack but it is not easy against this team.

“We could not expect after 30 minutes [to] be 4-0 up. The second half didn’t have much but we created a lot. The players made an incredible effort – all of them.

“The first half we played with our wingers more inside, not wider. I think that was a mistake from my side. We corrected in the second half and were better.

“It is important, we beat them twice. Zinedine Zidane never lost knockout games. You see the calm and personality they play with, they are good.”

PEP GUARDIOLA TOLD TO BE ALERT FOR LYON CLASH

Attention will now turn to their one-off quarter-final with Lyon. They will play the French team – who beat Juventus – next Saturday.

And Guardiola revealed his scouts have told him they must be “alert” against their next opponents.

“We are here to try and win the Champions League. It is one step, if we think that is enough we will show how small we are. If you want to win you have to beat the big clubs.

“I just spoke with the scouting department (about Lyon) and they told me to be alert. We have eight days to prepare for it. We will enjoy it and then after we will think about Lyon.”