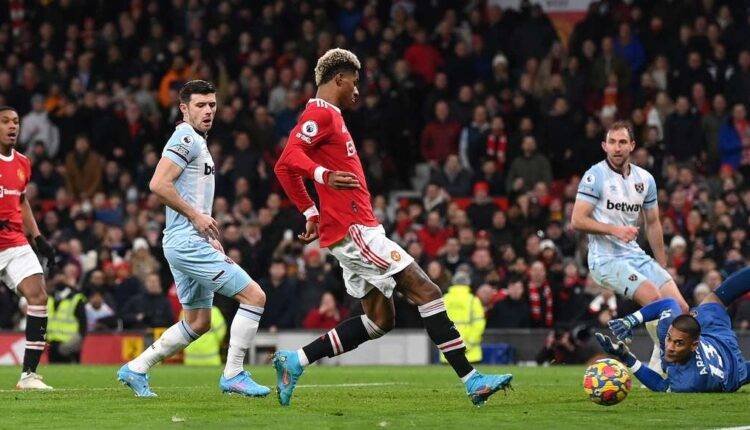 Despite the huge implications of this clash, with both sides vying for a chance to end the day inside the top four, it was a fast and frenetic start to proceedings. The hosts soon took control, but struggled for clear-cut openings. Mason Greenwood saw a dangerous effort blocked by Aaron Cresswell, before Cristiano Ronaldo came inches away from nodding home Bruno Fernandes’ cross. The ‘Hammers’ best chances came on the break, with Michail Antonio and Jarrod Bowen evading challenges from the midfield before being felled by stern challenges from the returning Harry Maguire. Neither side had been able to register a shot on target before HT.

Alphonse Areola was the first goalkeeper to be tested moments after the restart, as a fortunate deflection allowed Fred a huge chance, but the French shot-stopper was able to turn his effort round the post. The ‘Red Devils’ had failed to score from a corner so far this season, and Raphaël Varane should’ve set that record straight on the hour mark, but his near post header drifted narrowly wide.

Ralf Rangnick’s substitutes combined to snatch all three points for the hosts. Anthony Martial slotted into Edinson Cavani, who squared across the six-yard box to find Rashford for a tap-in. The 24-year-old’s second goal in as many games sent the Stretford End into raptures, securing a crucial win for his side in the race for the top four. David Moyes’ men failed to offer any real threat to David de Gea all afternoon, extending their poor record at Old Trafford, failing to win on any of their last 14 league visits.