A masterclass from Robert Lewandowski saw Bayern Munich beat Borussia Dortmund 3-1 in the DFL-Supercup at Signal Iduna Park, to give Julian Nagelsmann a maiden piece of silverware in his managerial career. 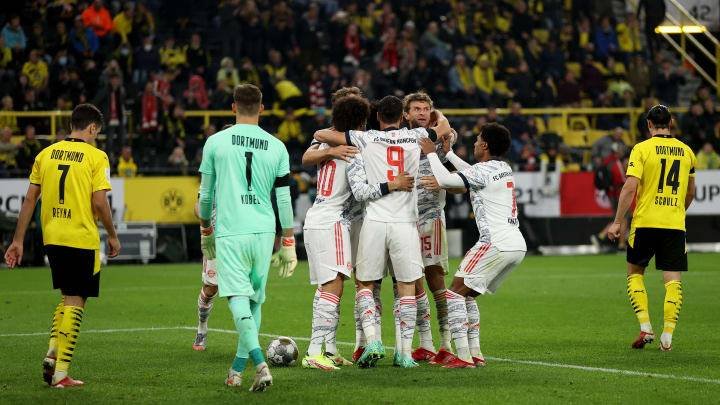 Not devaluing the legacy of this unique trophy, Dortmund boss Marco Rose and his counterpart Nagelsmann each made just one change from their respective Bundesliga openers last weekend. After a moving pre-match tribute to the late Gerd Müller, the match started high in intensity but low in quality, as the two outfits made several careless errors in possession. Marco Reus had a wonderful opportunity to give the ‘Schwarzgelben’ the lead early on, but his shot was saved by Manuel Neuer, while Robert Lewandowski’s close-range effort was cleared off the line by Axel Witsel. However, the Bayern Munich marksman put his side ahead in the 41st minute, when he powered a header past Gregor Kobel and into the bottom corner.

It took Bayern Munich less than four minutes after the interval to double their lead. Thomas Müller, under the watchful eye of new Germany manager Hansi Flick, tapped in after Dortmund were unable to clear their lines. The home side then enjoyed a brief spell of superiority, and Reus halved the deficit with a stunning effort from outside the box.

The Bavarian outfit was in no mood to surrender their lead, though, and Lewandowski calmly slotted in to grab his second of the game and make the remainder of play a mere formality. This latest success means Bayern have now won five of the last six editions of this trophy and will use that as early fuel in their quest for a tenth straight Bundesliga title.