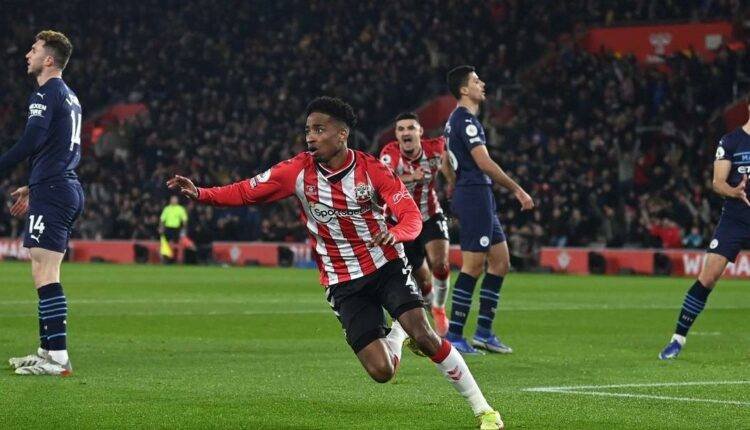 Manchester City’s procession towards the title hit a bump in the road following a 1-1 draw with Southampton at St Mary’s Stadium, ending a run of 12 consecutive Premier League victories.

The ‘Saints’ marched into the contest facing a Man City team that had an 11-point lead at the top of the table, but Pep Guardiola’s side made a slow start to this particular assignment on the south coast. They were stunned in the seventh minute thanks to Kyle Walker-Peters’ first-ever Premier League goal, as he linked up superbly with Nathan Redmond, took a touch and fired a clinical strike past Ederson. Armando Broja thought he had doubled the hosts’ advantage from Oriel Romeu’s through ball, but the assistant’s flag spared the blushes of Guardiola’s men on this occasion.

City had yet to cause the Saints defence too many problems, but Raheem Sterling came within inches of restoring parity to the scoreline when he latched onto Kevin De Bruyne’s pass, cut inside the box and curled an effort narrowly over the bar. He had an arguably even better chance moments later, only to fire a shot straight at Fraser Forster from point-blank range.

Ralph Hasenhüttl’s side continued to cause problems for their illustrious opponents after the break, with Broja twice coming close again – the Albanian saw his header hit the post, while he was brilliantly thwarted by Aymeric Laporte’s challenge to keep out his close-range effort.

But for all of the brilliance of City’s play at times this season, it was a set piece which broke Southampton’s resistance, courtesy of Laporte. The Spaniard made a late run into the box to meet De Bruyne’s free kick with a simple header which sailed past Forster in the 65th minute. The Belgian then almost completed the rescue act with a sumptuous strike which clipped the outside of the post, but Saints held on with their defence marshalled by the outstanding Mohammed Salisu to secure a well-deserved point. The result means City have increased their lead at the top of the table to 12 points, but this draw leaves the door ajar for Liverpool, who can close the gap to six points with their two games in hand.