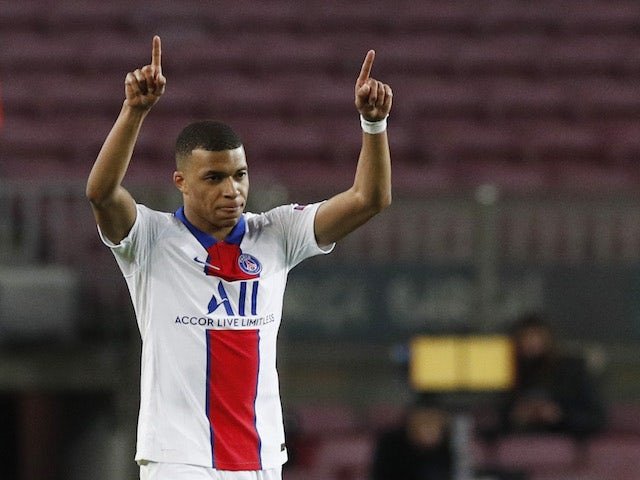 Barcelona travelled to the Parc des Princes on Wednesday hoping to overturn a 4-1 deficit from the first leg of their Champions League last-16 battle with PSG.

Lionel Messi broke the deadlock against his long-term admirers from the penalty spot at Camp Nou before Kylian Mbappé’s hat-trick and Moise Kean’s effort saw PSG put one foot firmly in the quarter-finals of Europe’s elite competition.

Both continental giants warmed up for this game with comfortable victories domestically at the weekend, as Barcelona overcame Osasuna 2-0 in La Liga while PSG cruised past Brest 3-0 in the Coupe de France. 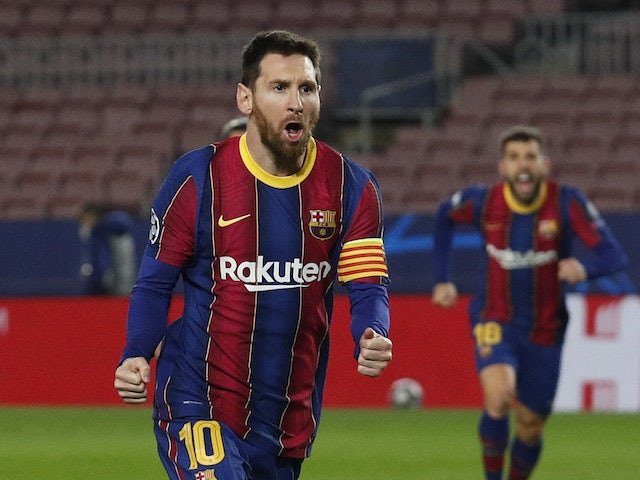 Lionel Messi has spent the past 15 years making Camp Nou his playground week in week out, but over the course of 90 minutes on February 16, PSG’s Kylian Mbappé produced a performance which many fans believe signalled the passing of the torch.

With Neymar and Angel Di Maria watching on from the medical room, fans and journalists alike expected PSG to struggle against Barcelona and Messi – who went out there with a point to prove amid the intense speculation surrounding a move to the French capital – and the Argentine quickly silenced PSG’s vocal cohorts with the opener from the penalty spot.

However, it took an inspired Mbappé just five minutes to restore parity for PSG before the half-time whistle blew, and the former Monaco man proceeded to write his name into the history books with two more strikes in the second 45, while Everton loanee Moise Kean also chipped in with a memorable Camp Nou goal for the enraptured Parisiens.

By chalking up a trio of goals on the Catalans’ famed turf, Mbappé became just the third player of all time to score a Champions League hat-trick against Barcelona – following in the footsteps of Faustino Asprilla and Andriy Shevchenko – while another goal on Wednesday would see him become the youngest player in the history of the tournament to hit 25 goals – a record currently held by none other than Messi himself.

The Frenchman was once again in scintillating form in PSG’s most recent outing, as his brace saw Pochettino’s side ease into the next round of the Coupe de France courtesy of a 3-0 triumph over a leaky Brest, while Pablo Sarabia – deputising for the injured Di Maria and COVID-positive Kean – followed up his winner against Bordeaux with the second goal against Les Pirates.

As all the best managers do, Pochettino refused to get carried away after his side’s resounding win at Camp Nou as he called on PSG to “stay humble”, but it would have been extremely difficult not to feel an overwhelming sense of pride after thumping La Blaugrana on their own turf – even in the absence of 90, 000 fans filling the arena with noise.

However, PSG are welcoming Barcelona to a ground where they actually lost last time out – a 2-0 defeat to title rivals Monaco in Ligue 1 – but the French champions had won six league games on the bounce prior to that loss, although they are now at risk of losing back-to-back home matches for the first time since May 2009.

Even though the hosts are still waiting for that illustrious first Champions League crown, they head into the second leg having scored 22 times in a row on home soil in the Champions League – a run dating all the way back to 2015 – while Real Madrid were the last team to keep a clean sheet at the Parc des Princes in Europe’s elite competition in October of that year.

However, one would be folly to simply overlook the 2016-17 Remontada after PSG stormed to a 4-0 win in the first leg, but even though they will once again be playing in front of tens of thousands of empty seats, the French champions surely could not suffer such a calamitous collapse again?

Of course, Barcelona, their impassioned supporters and ‘new’ president will be hoping that is exactly the case on Wednesday, as Ronald Koeman’s side have the steepest of mountains to climb if they are to somehow keep their dreams of European silverware alive.

Notwithstanding the drama surrounding a police raid and arrest of former president Josep Maria Bartomeu, Barcelona’s playing and non-playing staff all voted for their new chief in Sunday’s election, and Joan Laporta won by a landslide to secure a second stint in the Blaugrana offices following a famed seven years at Camp Nou between 2003 and 2010.

During that time, Barcelona secured a quartet of La Liga titles, two Champions League crowns, and two special faces in Messi and Pep Guardiola burst onto the scene in Catalonia, with the former’s future certainly a priority for Laporta to resolve as the clock ticks on his time with Barça.

Being able to prove that the Blaugrana are once again capable of challenging for the biggest prize of them all would be a good starting point, but even though Messi managed to equal Raul’s record of scoring in 17 consecutive Champions League campaigns in the first leg, the Argentine will likely be forced to kiss the Champions League trophy goodbye for another year, unless lightning can strike twice.

The odds are heavily stacked against them, but Barcelona can at least take solace from the fact that they head into this game on the back of four consecutive wins across all competitions – scoring 10 goals and conceding a grand total of zero in that run – and just days after an enthralling Copa del Rey turnaround against Sevilla, Koeman’s side took the spoils in a 2-0 triumph over Osasuna in La Liga.

Messi turned provider on that day as he set up Jordi Alba to rifle home the opener on the half-hour mark, and the Argentine then registered his 11th assist and 35th goal contribution of the campaign in the 83rd minute, with teenage protégé Ilaix Moriba scoring his first goal for the club from Messi’s pass.

Koeman’s side appear to have found their defensive resolve at a crucial time, and they also managed to navigate their Champions League group-stage campaign without shipping a goal on unfamiliar territory, as they secured three wins and three clean sheets at the homes of Ferencvaros, Juventus and Dynamo Kiev earlier in the season.

However, La Blaugrana have come up trumps in just one of their last nine Champions League knockout matches on the road, and having suffered back-to-back defeats to Juventus and PSG in this season’s tournament, Barça could record a trio of successive defeats in Europe’s elite competition for the first time ever.

A second Remontada is certainly not beyond the realm of possibility – especially with home advantage all but wiped out in the absence of supporters, as proved in the first leg – but with the trio of Di Maria, Mbappé and Neymar potentially enjoying a long-awaited reunion this week, optimistic Blaugrana supporters may end up disappointed. 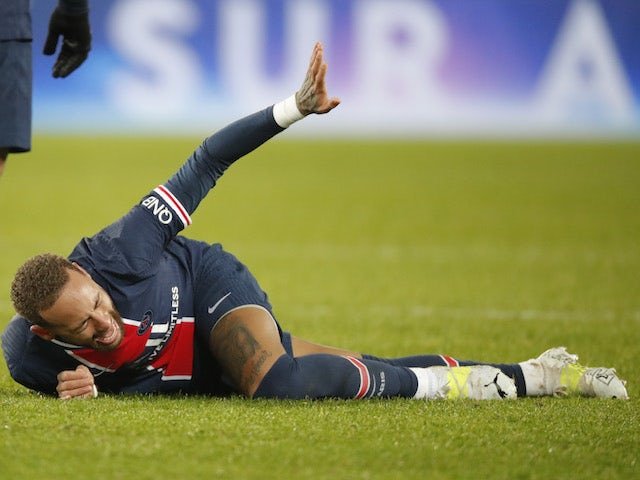 There was initial optimism over Neymar’s availability for this match, but PSG confirmed on Monday that the Brazilian attacker will not be ready to face his former club this week.

With Alessandro Florenzi expected to overcome a muscular problem in time to line up at the Parc des Princes, PSG only have three confirmed absentees in Neymar, Moise Kean (coronavirus) and Juan Bernat (ACL) for the second leg.

Pochettino made a raft of changes for the Coupe de France meeting with Brest – as expected – so will welcome back the likes of Keylor Navas, Presnel Kimpembe, Marquinhos and Layvin Kurzawa to the rearguard on Wednesday.

Idrissa Gueye and Leandro Paredes are set to man the engine room, while Angel Di Maria made his long-awaited return to action off the bench on Saturday and should be trusted from the first whistle here.

With Neymar confirmed to be missing out, Di Maria, Marco Verratti, Mbappé and Mauro Icardi will likely form the fearsome attacking quartet for the hosts.

Barcelona are not so lucky on the injury front as Gerard Piqué, Sergi Roberto and Ronald Araujo have all exacerbated previous injuries following their comebacks, and the trio will play no part in the second leg.

Attacking duo Ansu Fati and Philippe Coutinho are definitely out of this game, while Jordi Alba fell awkwardly on his arm against Osasuna but should be available for the second leg.

Koeman has experimented with a 3-4-1-2 in recent matches, and it has worked to great effect, so the Blaugrana boss may be tempted to stick with the same setup as Barça go searching for goals at the Parc des Princes.

Aside from Junior Firpo potentially replacing Alba if he is not passed fit, Barça could name an unchanged side from the win over Osasuna, meaning that Ousmane Dembélé may have to make do with a spot on the bench once more. 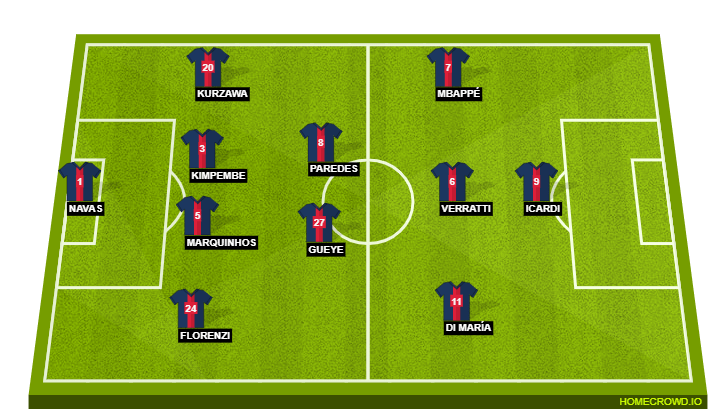 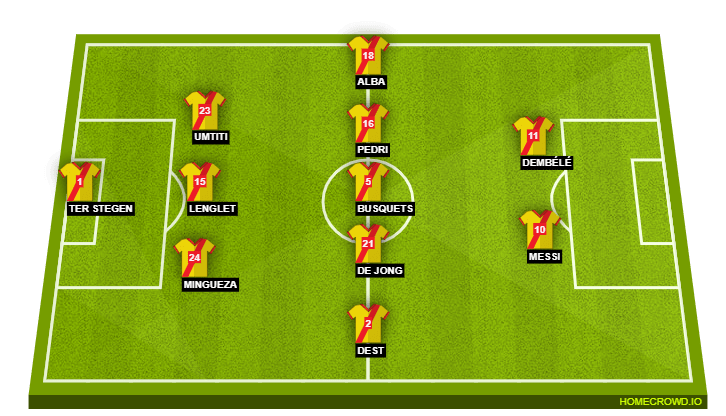 Wednesday’s second leg represents the 13th meeting between PSG and Barcelona in the Champions League, with the hosts boasting four wins compared to La Blaugrana’s five.

A clean sheet for either team would be a novelty in this fixture, as 37 goals have been scored in the last nine meetings between PSG and Barca since 2012, with Neymar (7) and Messi (5) leading the way in terms of goals.

PSG have notched up at least two strikes in four of their five home meetings with the Blaugrana in the Champions League, and should Barcelona somehow turn the tie around on Wednesday, they will become the first team ever in Europe’s big league to progress after a first-leg home defeat by three goals.

Barcelona’s defensive solidity is all well and good, but unless the visitors go for goals in this game, they will exit the Champions League with a whimper. Such a gung-ho approach could prove to be wholly effective or completely fatal against an in-form PSG and their rampageous attackers, who will have a glint in their eyes as they take on an injury-hit Blaugrana.

A repeat of the 2016-17 comeback is surely nothing more than a pipe dream for La Blaugrana, who should avoid another thumping, but we cannot see PSG throwing it away now and expect the French champions to advance after a thrilling draw on Wednesday.

How To Make Deposit To Your Bet9ja Account : Easy Steps

Which is the Most Reliable Soccer Prediction Site?

Which Football Prediction Site is the Most Accurate?