Ukraine beats Scotland in the ‘play-off’ and approaches the finals 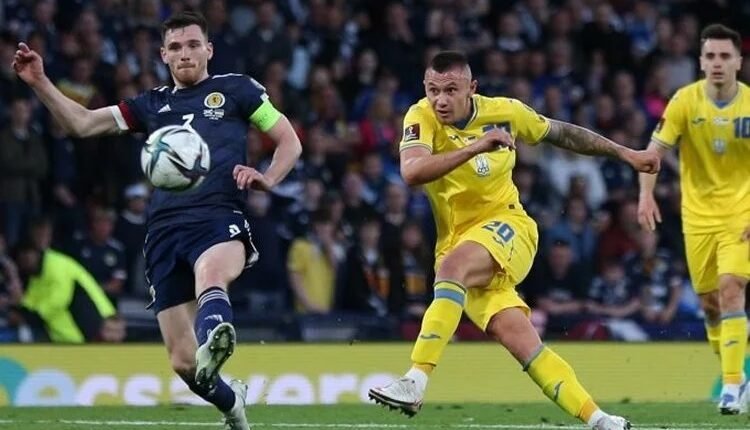 Ukraine, clearly strengthened in terms of spirit, today achieved a very fair victory over Scotland, by 3-1, and is preparing to discuss with Wales the last European spot for the 2022 World Cup, in Qatar.

In Glasgow, Scotland failed to take advantage of the ‘house factor’, against a redoubled opponent, after the war between Russia and Ukraine, which has lasted more than three months.

Dismissed from fighting militarily, Oleksandr Petrakov’s pupils prepared in Brdo, in the Slovenian Alps, for ‘their war’, which is to guarantee the trip to Qatar at the end of the year, winning both games of the ‘play-off ‘ European qualification for the World.

Without playing official matches since November, the team that team in yellow nevertheless presented itself in very good shape, especially its ‘foreign legion’, the players that militate in the best championships in Europe.

Among these players is Benfica’s Roman Yaremchuk, renewed bet for the spearhead and author of one of the Ukrainian goals, then making the 2-0, at the start of the second half.

Before, the dominance of the visitors had already yielded a goal, in the 33rd minute, with Yarmolenko finishing, with great talent, a Malinovskyi long throw.

The ‘creative’ of West Ham only needed two touches of the ball – one to receive it and the other to make an impeccable ‘hat’ over Gordon.

The 45th goal of his career at ‘Zbirna’ leaves him very close to the record of 48 goals set by Andriy Shevchenko, still the team’s top scorer.

The tie was then very well underway and more was left in the 49th minute, with a header from the Benfica forward.

After an attacking move by Ukraine, the ball went to the right where Karavaev executed a well-measured cross to the far post, where Yaremchuk burst in.

After that goal, Scotland was shaken, but not discouraged and continued to discuss the game, only with less accuracy than needed.

Even so, it reached 1-2, in the 79th minute, in a ‘strange’ move scored by Callum McGregor, with Stepanenko still taking the ball out of his goal – but already beyond the goal line, he considered the ‘goal line’ system ‘.

Solid in defending, quick and dangerous in attacking, Ukraine could have ‘killed the game’ for Zubkov, but it was Dovbyk who closed the score, in the 90+5th minute, again on the counterattack, launched by Zinchenko.

Now, Ukraine doesn’t even leave Great Britain, on its way to Qatar, and has an appointment with Wales in Cardiff, on Sunday, in the final of path A of the European ‘play-offs’.