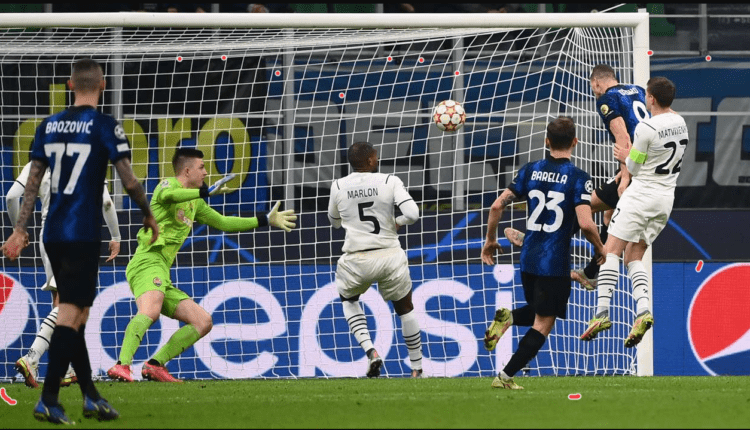 Simone Inzaghi edged closer to becoming the first manager since Claudio Ranieri to guide Inter Milan to the UEFA Champions League (UCL) knockouts, as his side triumphed 2-0 over Shakhtar Donetsk – a result that extends the ‘Nerazzurri’s’ unbeaten run to 13 matches against Ukrainian opposition.

In the knowledge only a victory would maintain hopes of UCL progression, Shakhtar were forced back early on, with valiant defending denying a potent Inter attack. Two quick-fire Lautaro Martínez goalbound efforts were blocked by covering defenders, whilst Edin Džeko’s close-range strike was smothered by goalkeeper Anatoliy Trubin.

Persistent attacks from the home side eventually brought about a breakthrough, when Ivan Perišić slotted underneath an onrushing Trubin. The Croatian international had converted from a pinpoint Matteo Darmian cross, yet a marginal offside from the former Manchester United full-back led to referee Ovidiu Hațegan disallowing the goal. Further chances for Džeko and Nicolò Barella passed by, meaning the hosts were left with work to do after the break.

If Inter had been frustrated with the officials in the first period, Inzaghi was left furious with referee Hațegan early in the second. Martínez had converted a volley at full stretch, but after a VAR check, yet another goal for the hosts was chalked off.

Ultimately, their pressure paid off, as Džeko netted twice in six second-half minutes to give the hosts a deserved lead. Arriving late onto the ball, the Bosnian international rifled home from the edge of the box to break the deadlock, before nodding a header beyond Trubin at the back post just moments later.

For Shakhtar, their UCL campaign was summed up by Dodô’s late strike, which hit the inside of the post before creeping just wide. The defeat confirmed their position at the bottom of Group D, whilst Inter will be dreaming of a maiden knockout appearance since 2011/12.