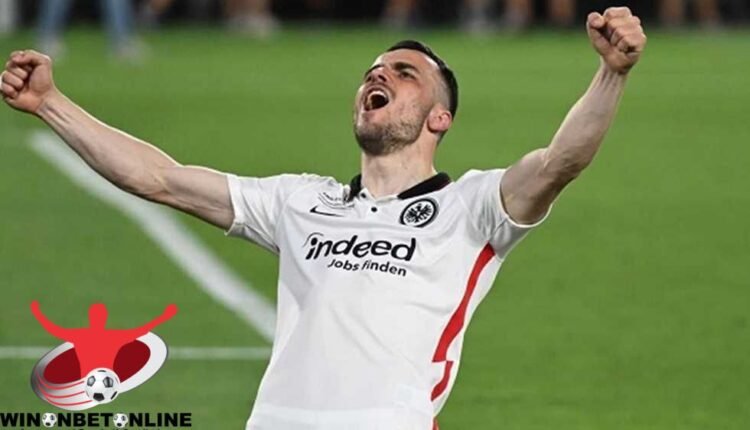 Filip Kostic will soon become the seventh Serbian footballer in Juventus history: Dusan Vlahovic is among the most recent

It is news of the last hours that Juventus have practically closed for Filip Kostic from Eintracht Frankfurt. The two companies have reached an agreement in principle on the basis of a permanent transfer for 13 million as a fixed basis plus 4 related to bonuses. The player will instead sign a three-year contract worth 2.5 million net plus bonuses, for a maximum of 3 million per season.

In the late afternoon today – or at the latest tomorrow morning – the player will fly to Turin , where tomorrow he will carry out his medical examinations and then sign the contract that will officially bind him to the Old Lady . After greeting the fans at the end of the Bundesliga first match against Bayern Munich, the Serbian also greeted his teammates; left in the morning to reach Helsinki, the capital of Finland, where tomorrow evening they will face Real Madrid in the first European super cup final in the history of the German club

After the arrival of Dusan Vlahovic in Turin during the winter market session, another Serbian therefore ends up in Juventus. In the history of the Turin club he is the seventh Serbian footballer , among those who have actively contributed to writing part of Juventus’ history and those who have disappointed expectations, we find out who are all the Serbian players who have played with Juventus.

Serbian footballers who played for Juventus

Vladimir Jugovic
After arriving in Italy in 1992 at Sampdoria, in 1995 Vladimir Jugovic moved to Juventus for six million euros, becoming the first Serbian in the history of the Juventus club. In the shadow of the Mole he spent two quite positive seasons. Juventus is the second team, after Sampdoria, with which Jugovic can boast more appearances in his career. In fact, he wore the black and white jersey in 77 official matches, with 10 goals and nine assists to his credit. A few trophies also arrived for him in Juventus: a Serie A championship, an Italian Super Cup, a Champions League (at the time the Champions Cup), an Intercontinental Cup and a European Super Cup. At the moment Jugovic is also considered the greatest Serbian footballer in the history of Juventus.

Zoran Mirkovic
The compatriot was followed by Zoran Mirkovic in 1998. Also in his case Juventus bought him from another Italian club, Atalanta, which a couple of years earlier had taken him from Partizan Belgrade. Purchased for an explicit request of the coach of the time Marcello Lippi, Mirkovic did not have the same story as Jugovic in Juventus. He too stayed two years, but collected 50 appearances. Just one, however, the trophy won in Turin, a UEFA Intertoto Cup.

Darko Kovacevic
The third Serbian shot by the bianconeri was not long in coming, it was in fact closed just one season later, in 1999. This time, unlike the other two, the bianconeri fished abroad, and in particular in Spain. Real Sociedad went to 17 million euros for the first Serbian striker in Juventus history. He arrived in a Juventus that had people of the caliber of Filippo Inzaghi and Alessandro Del Piero in front of them, but still managed to carve out a fairly important space. The confirmation comes directly from the numbers, in the two years spent in Turin he obtained 70 appearances, seasoned with 26 goals and three assists. The best of him came in the Uefa Cup in his first season with Juventus, in which he won the title of top scorer having scored 10 goals in eight appearances, second title of consecutive top scorer in the competition after the one won the previous season with Real Sociedad. In Juventus, like Mirkovic, he only won one UEFA Intertoto Cup.

Ivan Ergic
So we come to the Serbian ghost, who joined Juventus only for the cards, we are talking about Ivan Ergic. The of him represents a real case, perhaps the most absurd in the ultra-centennial history of Juventus. Taken from the Perth Glory (Australian team, where he had taken refuge with his family due to the war in the Balkans) for 240 thousand euros in the summer of 2000, with the bianconeri he did not even play once on the pitch. His passage from Turin lasted just two weeks, after which he was sold to Basel.

Milos Krasic
To find the fifth Serb in Juventus history, you need to take a leap forward of 10 years, until the summer of 2010. Long courted and after the excellent championships in Russia with the shirt of CSKA Moscow, Milos Krasic moved to Juventus in exchange for 15 million euros. When he arrived in Turin he was immediately given the nickname “new Nedved” also for the similarity of hairstyle with the 2003 golden ball, but again Nedved was left with only that. In the two years spent in Juventus he highly disappointed expectations, however, collecting 50 appearances seasoned by 10 goals and nine assists. In the summer of 2012 it was then sold to Fenerbahce for 7 million euros. In the two years he spent in Turin he still managed to win a Serie A championship.

Dusan Vlahovic
On the other hand, 11 and a half years have passed between the purchase of Milos Krasic and that of Dusan Vlahovic, which took place during the winter transfer market session. Vlahovic, taken from Fiorentina for 81.60 million euros, is also the most expensive of the seven, and by a lot. He has already played six months with Juventus, totaling 21 appearances, in which he scored nine goals and provided two assists. The next championship will be the spearhead of Massimiliano Allegri’s team, which focuses strongly on him after the last great years with Fiorentina, in which he has scored dozens of goals.

Filip Kostic
And so we come to what will soon become the seventh Serbian in Juventus history, Filip Kostic. We talked about the details of his transfer in the introduction of the piece, here we will limit ourselves to saying that Kostic has returned from a leading year with the Eintracht shirt, with which he won the Europa League, also being elected as the best tournament footballer.