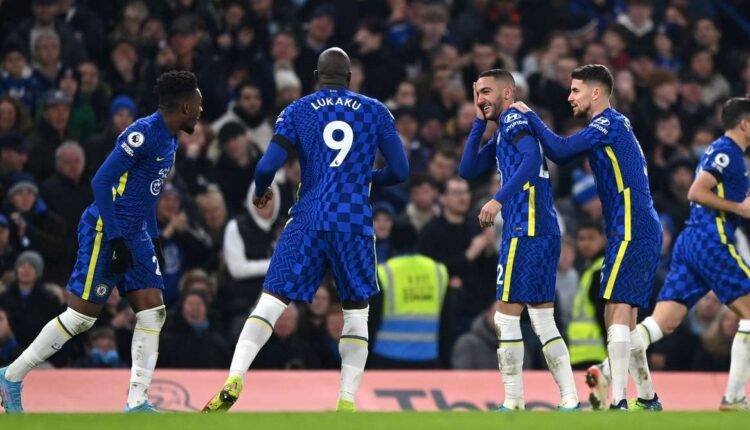 Chelsea ended a run of four Premier League (PL) games without a win by rallying in the second half to defeat Tottenham Hotspur 2-0 at Stamford Bridge, completing a season quadruple over their opponents for the first time since 2001/02.

Chances were few and far between during the first half, which was mainly down to Antonio Conte’s plan for Spurs to shut out his former employers and avoid a fourth defeat for Spurs to the Blues in 2021/22. Mason Mount and Hakim Ziyech’s creative roles were well-managed defensively by Pierre-Emile Højbjerg and Ben Davies, isolating Romelu Lukaku and rendering the hosts ineffective.

This meant that controversies ended up being the main talking points – no different to past editions of feisty London derbies. The first followed a late stamp from Matt Doherty on Malang Sarr midway through the half, but despite a VAR check, the Irishman was found to have done no wrong. The second came minutes before the break, and saw the visitors questionably have a goal chalked off for a foul. Thiago Silva was caught out as Ryan Sessegnon slipped the ball behind him to Harry Kane, who went on to score, but the Brazilian took advantage of a slight nudge from the England striker by going to ground. Referee Paul Tierney pulled play back, and it remained 0-0 at HT.

That final scare turned out to be enough to wake Chelsea up, and at the start of the second half they responded with two sucker-punch goals. Hakim Ziyech opened the scoring as he did against Brighton on Tuesday, finding the top left corner with a beautiful curling strike, and Silva came back to haunt Tottenham after his earlier antics with a glancing header from a free-kick to make it 2-0 and become the joint oldest player to score in the PL alongside Ryan Giggs at 37 years and 123 days old.

Spurs, feeling aggrieved by the decision at the end of the first half, were unable to muster a comeback as they did so famously against Leicester on Wednesday, and slumped to yet another away defeat at the hands of their rivals. Meanwhile, Thomas Tuchel’s side return to winning ways after a run of three draws and one defeat, and pull nine points ahead of fourth-placed Manchester United.