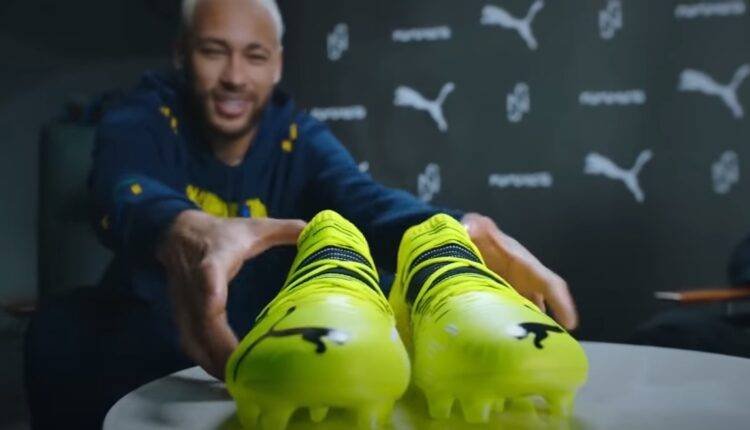 In September 2020, Neymar shook the football world by announcing to leave his long time sponsor Nike to join Puma. After 15 years of working with Nike, this came as quite a surprise. Nike had signed Neymar already at age 13 when he was still a child. 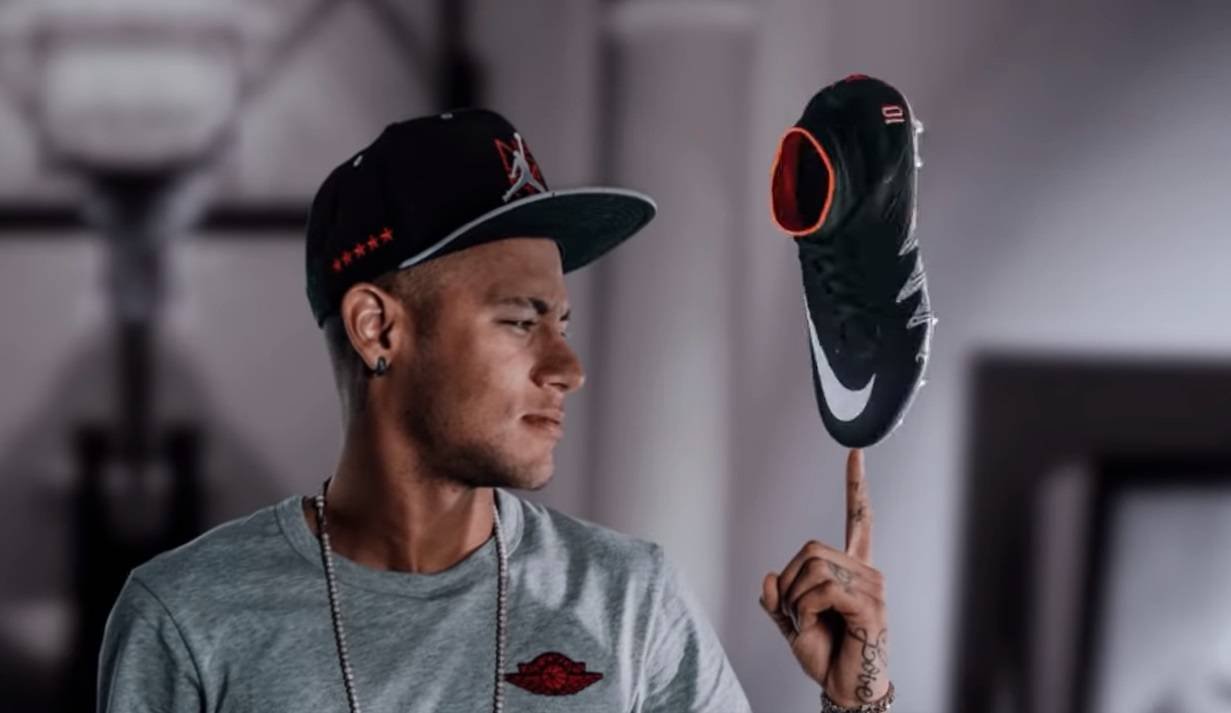 He developed into one of the key players of the brand, had his own signature line and was the face of many marketing campaigns. He even had the honor to become the first football player to feature the Jordan logo on his boots.

His choice to leave the company that had believed and invested in him for so long sparked quite a debate in the football community. Why did he leave Nike, and why would Nike let him go? That debate was fuelled when more high profile Nike players were leaving the brand or were seen in competitors’ boots: Raheem Sterling, Sergio Ramos and even the Fifa Player of the year Robert Lewandowski.

Why are all those players leaving Nike? Is the biggest sportswear company in the world no longer able to hold on to the best players? Or is it all part of a bigger plan? Before talking about individual players, let’s have a look at the bigger picture.

Sport brands like Adidas and Nike pay professional players to wear their boots, so they are seen by millions of consumers on TV who then want to buy and wear favourite players’ boots. The five European leagues from England, Spain, Italy, Germany and France are the most relevant in terms of viewership and performance.

Therefore, they are also the most important in terms of marketing and their players’ feet are the most valuable billboards for brands. In 2021, Nike has by far the biggest share of players in the big five leagues.

More than every second player is playing in Nike boots, followed by Adidas and Puma. But it wasn’t always like that. Adidas and Puma used to dominate the football market. Nike, historically a running company, was late to the party.

After their founding, Nike first focused on the American market where football, or soccer as it’s called in the US, was less relevant than for instance Basketball. But when they were looking to expand to Europe, there was no getting around football any longer.

In the early 90s Nike made a strong push into the football business, making endorsement deals with famous players such as Romario, Eric Cantona or Edgar Davids. The first big win in the battle for the best players was when Nike signed the Brazilian national team in ‘96 that went on to win the world cup six years later.

Nike continued to grow in football by signing more top players. But still, Nike was lagging behind Adidas, who had their roots in football and a much superior network to clubs and officials. Especially in strong Adidas countries like France or Germany, Nike was having a hard time to sign the best players.

Look at Germany for instance: the first real high profile player that Nike had in Germany was Miroslav Klose. Ballack, Kahn, Schweinsteiger, Lahm, Müller, Neuer. All Adidas players. So we can guess that Nike took a lot of money and invested heavily wherever they could.

Not only in quality, but quantity. The 53% of Nike players that we can see today are most likely the result of a strategy that focused not only on signing the best but the most players. The idea was probably that if half the league is wearing Nike, the swoosh will be visible all the time on TV.

So Nike would be established as an authentic football brand. The strategy worked and made them the market leader in football. Many of the sport’s biggest stars today are Nike players, most prominently of course Cristiano Ronaldo.

And Ronaldo’s successor at Nike was thought to be Neymar. So why did Nike let him go? The simple answer is probably money. Neymar wanted more than Nike was willing to pay. Another reason might be that he didn’t want to be number two behind Ronaldo any more.

As his move from Barcelona to Paris suggested, Neymar does not like to play in the shadow of anyone. At PUMA, he knew that he could be the main man. And with Messi at Adidas and Ronaldo at Nike, Puma was probably glad to spend the money for Neymar to join the club of superstar sponsors.

Nike probably looked at the financial implications, combined with the fact that Neymar is not getting any younger, and made their decision. The fact that they let him go early, although he still had a contract running until 2022 shows that Nike did not fight very hard to keep him – but rather saved some money.

Raheem Sterling is a more telling case. He is younger than Neymar and just coming into his prime. He is also very marketable and has been leveraged by Nike in marketing campaigns and as a spokesperson regarding social topics, for example when speaking out against racism.

But despite reports that he would sign a new deal with Nike in the beginning, it now looks like he will move to New Balance as he has been spotted wearing their boots in training. New Balance might have some spare money left after ending their deal with Liverpool and apparently Nike is not ready to pay Sterling what New Balance is offering.

One reason might be that Nike already has a similar player that is also a political spokesperson: Marcus Rashford. So maybe they would have liked to keep Sterling, but are also sharpening their strategy and rather invest in only one of the two.

It seems that Nike has become very careful how to spend their money in football and is no longer using their budget like a watering can to sign every player out there. That is underlined as well by the Robert Lewandowski case.

Although he won the Fifa player of the year award for his outstanding 2020 season, Nike and Lewandowski are hesitating to continue their relationship. He hasn’t actually been confirmed as having left Nike yet, but has been seen training in blacked-out Puma boots.

A sign that he is considering to leave Nike as well. Neymar, Sterling, Lewandowski. Add Ramos and more players to the list, and it becomes clear that we are looking at more than just isolated, individual cases.

But what’s the reason for that extensive shift of players? The COVID-19 pandemic will most likely have an impact. The sportswear industry is hit hard, especially with major events being postponed or cancelled entirely, that are normally revenue drivers for Adidas and Nike.

So the brands need to streamline their budgets and save money wherever possible. But the pandemic is probably only the accelerator and not the cause for the change. That becomes clear when looking at who Nike is actually still signing and betting their money on.

For example Erling Haaland. He was one of the players promoting the Nike Dream Speed boots recently and even showed some individualized golden Nike boots on his Instagram. So while Nike seems to be OK to let Robert Lewandowski, currently the best striker in the world, move on, they are keen to keep Haaland, who might become the world’s best striker in the future.

Even more important for Nike is of course the role of Kylian Mbappé. It seems that the brand wants him to step into Ronaldo’s footsteps, which might have been one of the reasons to let Neymar go.

And Nike also has a great substitute for Raheem Sterling. We already mentioned Rashford, but lately Jadon Sancho was brought more and more into a prime position. At age 20, he was the youngest player to ever get his own signature line from Nike.

Haaland, Mbappé, Sancho. We can easily continue the list with Ansu Fati, Kai Havertz or Frenkie De Jong. Apparently Nike is preparing for the future. Sponsorship contracts with clubs or players usually run several years and are therefore long term investments for companies.

Unlike digital or event marketing budgets, a sports marketing budget is planned for years ahead and cannot be shifted around or reduced quickly. It’s all about foresight, predicting where the players will be over the course of the next five years.

That also puts into perspective why Nike let established players move on. It is a strategic move rather than just financial pressure or broken relationships. Therefore, it is likely that Nike already had a plan to shift their strategy to the new generation of football players.

The Covid19-crisis just accelerated the execution of that strategy. If anyone knows how much Neymar and Lewandowski are really worth for a sportswear brand, it is Nike, who used the players for commercials for over a decade.

Nike has all the sales data and insights to estimate their brand value. So they probably would have matched any competitor’s offer for Neymar – but didn’t think it’s worth it.