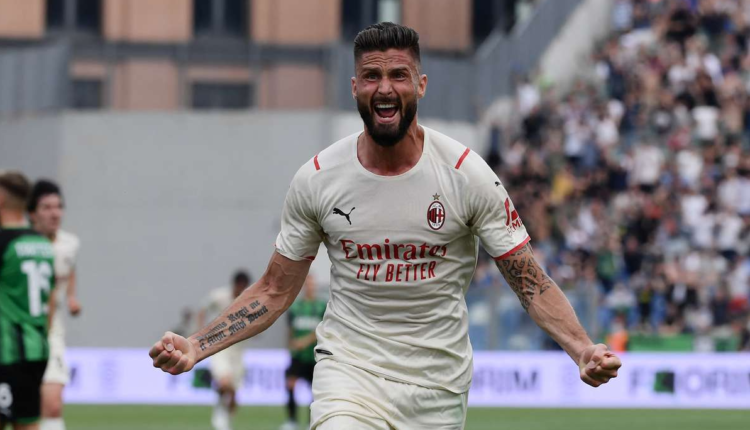 Olivier Giroud scored twice as AC Milan ended their 11-year wait for a Serie A title by defeating Sassuolo 3-0 to clinch a 19th Scudetto in their illustrious history, edging out city rivals Internazionale by two points.

The visitors were backed by a sensational away support of 18,000, which outnumbered the home fans, and they started on the front foot in search of an early goal to settle any nerves. Giroud saw his header saved brilliantly by Andrea Consigli, before Rafael Leão was denied by a last-ditch tackle from Gian Marco Ferrari.

Shortly after though, Giroud sent the away fans into raptures when he fired a shot underneath Consigli from Leão’s cross, with the ball just creeping over the goal line to make it 1-0. This goal saw Giroud, at the age of 35 years and 234 days, become the oldest player to reach double figures in his Serie A debut season.

The emotions of the ‘Rossoneri’ fans were cranked up another notch just after the half hour mark when Leão did very well to to shrug off a couple of challenges before squaring to find an unmarked Giroud inside the area, and the Frenchman powered home from close range to make it 2-0.

Stefano Pioli’s side continued to pour forward in a dominant first half display, and the irresistible Leão was involved once more as he set up Franck Kessié, whose fine left-footed finish extended the advantage to 3-0. The second half was never going to match the first for drama and goalmouth action, as the ‘Rossoneri’ took a foot off the pedal to stroll comfortably towards the title. Giroud was substituted to a standing ovation with just under 20 minutes remaining to cap off a fine season.

Substitute Zlatan Ibrahimović thought he had put the icing on the cake with just under 15 minutes remaining, but the offside flag denied him a ninth league goal of the season. It mattered little to AC Milan and their sizeable number of supporters in attendance, as Pioli’s side eased home to become kings of Italy once more.