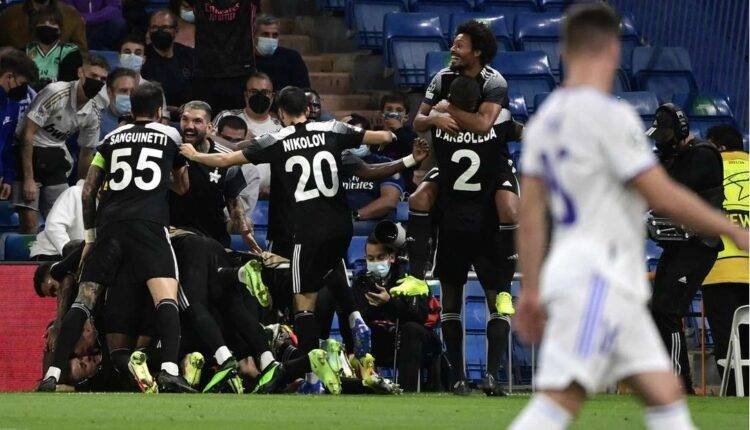 In only the second-ever meeting between a Spanish and Moldovan team, visiting minnows Sheriff denied the huge odds to seal an incredible UEFA Champions League (UCL) victory, following a stunning Sebastien Thill volley in the 90th minute – extending their unbeaten run to 17 games across all competitions.

With both teams in exceptional unbeaten form, the archetypal David vs Goliath encounter kicked-off just as anyone would expect – with the home side in full control of proceedings against the surprising table-topping lightweights. The first real threat of goal arrived with a quarter of the game having passed, from Benzema’s curling free-kick effort, the result of which was a stunning save from Greek goalkeeper Georgios Athanasiadis.

Sheriff may be inexperienced on the European podium, but that didn’t hold them back from stunning the record champions minutes later from Jasur Jakhshibaev’s brilliant counter-attacking header to put the underdogs one up. With the aim of inflicting further embarrassment, the goal scorer’s second shot of the game grazed just wide of the right post, followed by the massive sigh of an anxious Santiago Bernabéu. Real Madrid failed to avoid going into the second half without an equaliser at the least, with shots from Vinícius Jr, Benzema and Nacho all edging past the opposition goal as HT approached.

Having scored 110 goals in 37 UCL home games and failing to score just once in as many, ‘Los Blancos’ emerged on the other side with a point to prove. Ten minutes in, it was Eden Hazard who first alarmed Sheriff with a well-saved finesse shot. The home team didn’t have to wait for long to get their equaliser via Benzema’s penalty on the hour mark. He upset Athanasiadis’ staggering 10 hour 50 minute clean sheet record and etched himself as the UCL’s fourth all-time top scorer with 72 goals, beating the legendary Raul enroute.

Forcing the visitors to sit deep and adopt a counter-attacking style of play, ‘Les Merengues’ boosted by substitutes Luka Modrić and Toni Kroos, pushed on until the final minute, only for their efforts to go in vain as Sheriff scored a breathtakingly unlikely winner at the death. Thill struck a superb shot on the half-volley in the 90th minute to silence the Bernabéu, and hand Real Madrid their first defeat of the season.

Having proved that their opening group day victory over Shakhtar Donetsk was no fluke, the shock-win meant Sheriff extended their unbeaten run in Europe to ten games. The 19-time Moldovan champions sit top of Group D and pose a surprising threat to second-placed Real Madrid and third-placed Inter for a Round-of-16 spot.